5 replies to this topic

You're seeing it here first and this is as far as I've gotten.

I've got the Late and Early 68 mod cars' stats with my judgement of better (green) or worse (yellow).

The Early cars differences (highlighted in red text) are:
> one more car - the BT23B
> slightly different power for 9 of the cars
> No wings for 3 cars that get wings later

The 5HP or 10HP difference changed the speed of the cars by 1.9 to 2.3 mph but car weights are the same. 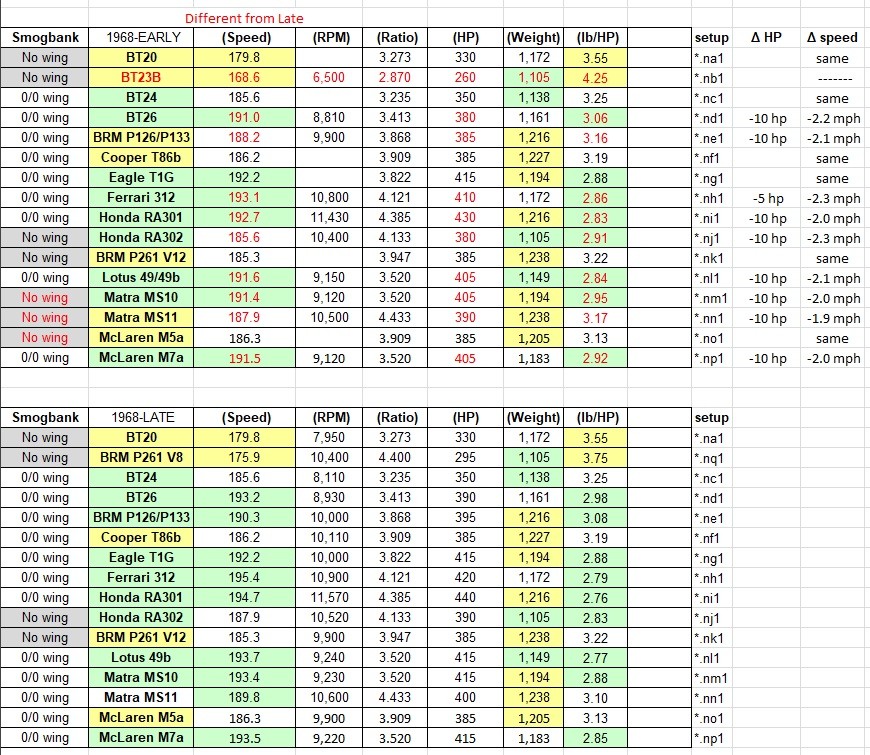 Nifty, Bob!  Thanks for composing.  I'll be going over it carefully in the next day or three.

Thanks Bob! This is great info to have for reference.

Thanks, Bob. About time you got this done.

"The best dividends on the labor invested have invariably come from seeking more knowledge rather than more power." Wilbur and Orville Wright.

Watch it! Don’t make fun of my obsession with numbers.

While you can touch quantities (although putting 400 horsepower into your hands might be difficult), a number is intangible. Yet they are so informative. They guide the way and even help us get to sleep. At least that’s the case with 43% of the people, 65% of the time.

"The best dividends on the labor invested have invariably come from seeking more knowledge rather than more power." Wilbur and Orville Wright.
Back to ADC GPL Announcements